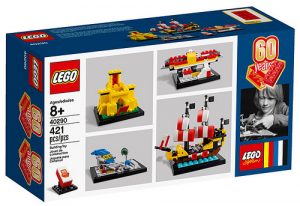 I meant to have something ready to post yesterday, but failed. January 28th, 1958, marks the anniversary of when inventor Kirk Christiansen Godtfred applied for a patent on what would become one of the most popular toys ever created. The LEGO® Brick.  It is a timeless construction toy that has captured the hearts and imaginations of children of all ages. What you can and can’t build is only limited by your imagination, and probably your budget!

My brother and I would spend hours building whatever ideas came to our head. Often times we would find that our imagination was a bit larger than our collection, and would require a redesign or scrap the idea all together. The parts were much simpler than they are today. So were the minifigures.

As part of the 60th anniversary celebration, LEGO® is putting out a few sets to celebrate. The guys over at Brother’s Brick have the details, so I’m linking to them instead of trying to get all of it gathered and posted for you.