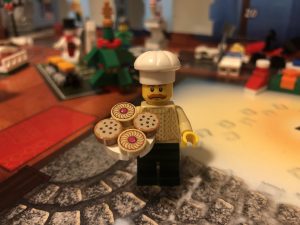 I called it! Well, I kind of called it. Today we get a baker with a tray of treats! What is interesting about this figure, is the hat is really the only thing that shows he is some sort of baker or chef. The torso, which is printed front and back, looks more like a sweater. So perhaps this isn’t a baker, but the children’s dad who likes to dress the part (much to the embarrassment of his children) and put on the chef’s hat. 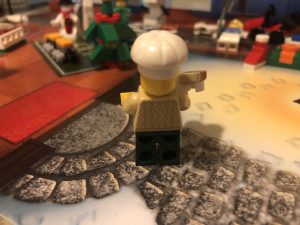 This is a great gift! I love the chef’s hat that LEGO® puts out, the torso printed on both the front and back is also welcomed. There were actually six treats in the bag, ’cause extra parts are always nice! Just a single sided printed head, but I think all of the LEGO® hipster minifigures will be jealous of this guy’s mustache.

I’m hoping that the good gifts are consistent from now until Christmas Eve!